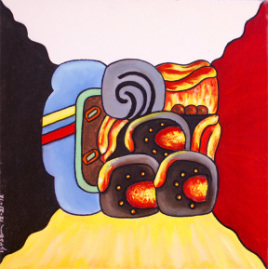 An Artistic Interpretation of Symbols from the Ancient Maya

The paintings in my series were inspired by the beautiful pre-Columbian writing glyphs and the ancient Maya creation myth as detailed in the Popul Vuh or "Counsel Book".  The writing of words in the four surviving ancient Maya books and on the ruins,  is a script combining logographic and phonetic principles.  The symbols can represent syllables or entire words and concepts.


In its simplest form, the Maya creation myth is represented by three hearthstones, which are both functional and  sacred. The painting above is my own combination of elements from the Maya creation myth.  The Four Cosmic Roads are overlaid by a complex image including the Three Hearthstones.The four cosmic roads of the Maya are represented in color: White for North, Yellow for South, Red for East, and Black for West.

I'm enchanted with the interweaving of art, spiritual concepts and the concrete aspects and the symbols from this ancient civilization.  Each ancient "writer" has infused their own style interpretation of the symbols.  There are subtle differences between the writer's symbols over time and from location to location, much like the differences we see in our own handwriting samples today.

The Quiche' people of today still refer to the triangle grouping of  the three bright stars in the constellation of Orion as "the hearth stones".  According to classic Maya inscriptions, the three hearthstones entered the sky and formed a new constellation at the end of the world that preceded this one.  The glyph representing this event at the center of the painting above is found on a stele at Quirigua'.  The glyph reads "yax ox tunal" , meaning "new three stone place", and repeats the sign for "stone" three times.  This symbol and others like it are referencing both spiritual meaning and literal time based on surrounding context.

This art series is based on the ancient Maya symbols, but with my own stylization.  The works are infused with traditional Maya references as well as current metaphor and design.  I've pushed the color beyond the traditional Maya color range in my pieces too. I hope the ancient Maya will forgive my cultural and artistic "stretches", and be pleased with my offerings in the present.

When I started this series in 2012, I expected it would be done in a shorter time frame.  Each piece took a minimum of a month to complete, and I was working on four or five at one time. The time flew by for me just the same, and I have to say that this is one of the most satisfying and fun art projects I've ever done.  I had to draw on a multitude of art and craft skills and my knowledge of various materials handling.  Most of the pieces have some dimensionality to them---in other words, they are not flat pieces.  Drying time for thicker layers and application of precious metal leaf took time and precision beyond my original estimates.  None of the pieces are framed.  Instead, the edges are finished in a rough, silver grit-based paint, lending continuity to the series.

All of these original paintings are mixed media in oil or acrylic paint.  Most include gold, silver and copper leafing, and a variety of other materials including rocks, sand, and various other textiles and materials. All the of the square pieces are 12" x 12" stretched canvas.

All images carry the copyright date of 12-21-12, which is the date for the end of the previous Cosmic Cycle on the Mayan calendar.  And as we all know, the sky didn't fall...and time didn't stop on that date.  It was simply a marker of the new cycle...and ALL IS WELL! 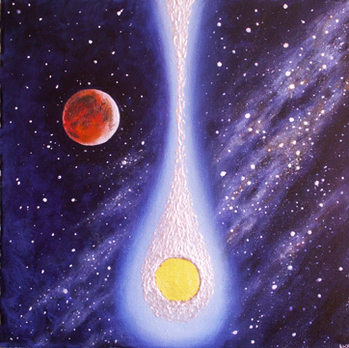 Alignment 12-21-12, Copyright by Lyrae  - The Great Cycle in Maya cosmology is the nearly 26,000 year "precession of the equinoxes". This refers to the wobble or changing angle of the earth as it turns on its axis, which is formally called "precession".  The changing angle is what gives us seasons.  These are marked by winter and summer solstices. One complete cycle of precession for the earth takes nearly 26,000 years to complete.  During the winter solstice on December 21st, 2012,  the sun was located (from our view) in the prominent band of the Milky Way.  The unique placement and time is the alignment of the galactic plane and the solstice meridian, accurately predicted by the Maya astronomical calendars.

The Maya refer to the Milky Way as the 'World Tree', and the dark rift in the Milky Way is 'Xibalba' be'... the Maya name for the road to the underworld.  During the alignment, the journeyer is able to enter the 'Heart of the Sky'.  The Maya believed that the star clouds that form the Milky Way was the place that all life began.  We now know from our telescopes that the dark stuff is star dust blocking the light of distant stars in star nurseries. The Maya didn't have our powerful technology, but they still got it right...!  We are all made of atoms from stars that exploded eons ago, and new stars are being born in 'Xibalba' be' all the time.

The "Alignment painting above is an interpretation showing our the moon during a solar eclipse, when it's in the shadow of the earth.  From our view, only the shorter wavelengths of light bounce back to our eyes and make the moon look blood red.  In this artwork, the Spirit symbol is modified to recognize three special alignments, including that of the "person". When aligned, they are able to travel a more direct path to the Xibalba' be.
.
Copyright by Lyrae Perry 12-21-12
This is an ongoing series and more paintings will be added as they are completed!  Please send comments or questions to me about this series via email--I'd love to hear from you!  elink22@gmail.com 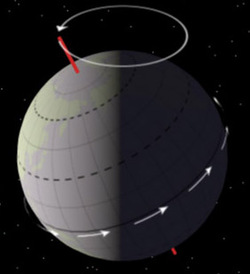 A spinning object will maintain both the magnitude and direction of its spin angular momentum unless some external torque acts to change that angular momentum. In the presence of external torque, the spinning object will precess . Observations indicate that the Earth's spin axis is precessing with a period of about 26,000 years. The spin axis currently points close to Polaris, but in 13,000 years it will be pointed about 47 degrees away from Polaris (toward the star Vega) since the tilt of the spin axis with respect to its orbital plane is about 23.5 degrees.

The torque which causes the Earth to precess comes from the gravitational pulls of the Sun and the Moon which try to pull the Earth's rotation axis toward the perpendicular to its orbital plane (the ecliptic plane). If the Earth were a perfect uniform sphere, there would be no precessional torque. The equatorial bulge of less than 1% plus any departures from spherical symmetry in density distribution are the only things which give the Sun and Moon any "handle" with which to exert torque on the Earth.
(Graphic courtesy of NASA)

NASA has a really nice graphic animation  that helps illustrate precession. Click the link to see it: http://visibleearth.nasa.gov/view.php?id=53974